These interactive learning journeys are designed to help you integrate powerful stories about resilience, courage, and hope into your social studies and ELA lessons. Each slide deck also supports a core SEL competency, such as self-management or responsible decision-making.
Explore
Dismiss

Sharing Articles with Your Students

Planning With the Pacing Guide 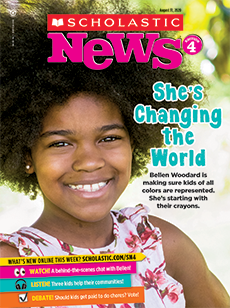 For most of her life, Kelly Yang kept a secret. After her family immigrated to the U.S. from China, her parents worked in a motel in Anaheim, California. They also lived in the motel, not in a house like other families. Yang never saw anyone like her on TV or in books, so she thought people might think her life was weird.

In 2018, Yang wrote her first novel, Front Desk. The main character, Mia Tang, is a young immigrant who uses her writing to stand up for people. Finally, there was a character Yang saw herself in. She hopes other kids do too.

Scholastic News: What do you hope kids take away from the Front Desk series?

Kelly Yang: I hope that kids have more of a window into life as an immigrant. That will give them a lot more empathy for what a lot of immigrants and people of color go through. I also hope that it humanizes Asian Americans and our struggle. We have the same hopes and dreams as everyone else. We just want to be treated the same.

SN: What do you admire most about Mia Tang?

KY: What's so great about Mia is that she’s learning about this new country at the same time that she's actually understanding how to use her voice to do something. She sees injustices happening to her friends and people in her community, and she uses her voice to stand up for what’s right. I think that's a really powerful message. It doesn't even take a lot—if you see somebody getting bullied, if you see somebody going through a hardship, just taking the time to care.

SN: Why was it important to create a character who looks like you?

KY: We haven't had a lot of diverse books, historically. While I was growing up, the only book where I saw an Asian American character who looked like me was Claudia in the Baby-Sitters Club. But even though she looked like me, she lived a life that was really different from mine. She had this perfect house and she had parents who had stable jobs. She had all these things I didn't have. My parents were bouncing around from job to job. We were living in a motel and I never saw this kind of stuff represented on the page.

And I didn’t know if I could be an author, because I had never seen one who looked like me. I remember going to the library, just pulling out books. Not one author was Asian American, and very few were people of color.

SN: Do you have advice for kids who face discrimination?

KY: Know that you’re not alone, and it isn’t about you. A lot of times when kids experience bullying or racism, they think they did something to deserve it. We did not do anything to justify this kind of treatment. There's nothing you can do to justify racism.

Then it’s important to understand the power in speaking out against it. That takes a lot of time and everyone has a different timeline. If you're not ready, that's OK. But know that you have a lot of allies, people who are going to be on your side. It may feel like that's just not true because you feel so alone and scared. You feel like no one's ever going to understand this trauma that you’ve been going through. You'd be surprised. If you talk to your teacher, your friends, there are people who might know how to help you because they might have gone through something similar. And by talking about it, that's when we stop feeling so alone.

SN: Why did you want to become an author?

KY: I always loved writing, like Mia does. I quickly realized that writing was like a superpower—it gives me the power to make a difference, to change someone’s life. Writing about the things we go through as Asian Americans and as people of color gives readers an understanding of what it’s like to walk in our shoes. I think that goes a long way in stopping some of the hatred that’s out there.

SN: Do you have any favorite books or favorite authors you’d recommend?

KY: I always recommend Other Words for Home by Jasmine Warga. She's amazing. Also, The Night Diary, by Veera Hiranandani and Genesis Begins Again by Alicia D. Williams. And my friend Aida Salazar’s book, Land of the Cranes.

SN: In your opinion, what makes a good story?

KY: Characters! A good character is someone you want to follow forever. And if you have that quality in your characters, so many people are just going to want to keep reading. And that's always my goal as a writer is just to get kids to turn the page.

Humor is also key. Making sure that even if we're talking about painful, hard stuff, to try to insert humor into it.

SN: Room to Dream, the third book in the Front Desk series, comes out in September. Can you give us any spoilers?

KY: Yes! After years of hard work, Mia and her family and Hank finally get to go on vacation. They go all the way across the world to China, where Mia is reunited with her cousins.

Note: The interview has been edited and condensed by the editors of Scholastic News.

Read e-books, meet authors, make new friends, earn virtual rewards, and more! Plus, you can help unlock a donation of 100,000 books for kids with limited or no access to them.