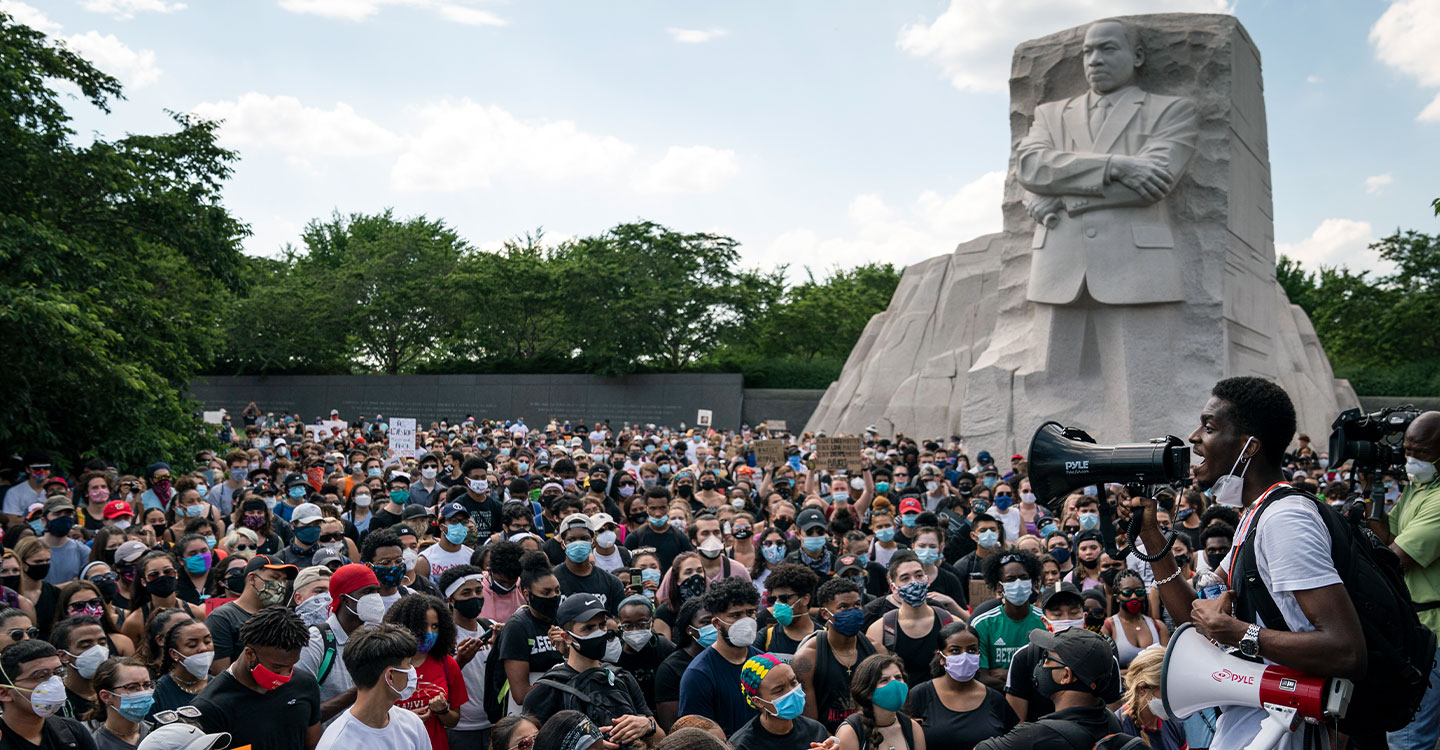 Protests spread across the United States after a Black man is killed by police.

By the Editors of Scholastic News

Hundreds of thousands of Americans and people across the world are taking to the streets. They are demanding an end to the long history of racism and police brutality against Black people in the U.S.

The protests are taking place in response to the death of a 46-year-old Black man named George Floyd. He died on May 25 after being pinned to the ground by a white police officer in Minneapolis, Minnesota. The officer had pressed his knee into Floyd’s neck for more than 8 minutes. Floyd repeatedly said he couldn’t breathe.

Police officers had arrested Floyd outside a convenience store. A worker had accused Floyd of using a fake $20 bill to make a purchase. Bystanders filmed the arrest on their phones and posted the videos on social media.

The videos immediately sparked outrage across the country. They added to the widespread fury over other deaths of African Americans at the hands of police. Now many Americans are taking to the streets to voice their anger, sadness, and frustration and to call for change.

A Long Struggle for Justice

The violent and unjust treatment of Black people has a long history in the U.S. It began with slavery, even before the nation was founded. From the 1600s to the 1800s, millions of people were kidnapped from their homes in Africa. Once in America, they were treated as property, not human beings.

Even after slavery was banned in the U.S. in 1865, other forms of racism continued. Many states had forced segregation and laws that limited black people’s basic rights, including voting in elections.

In the 1960s, during the civil rights movement, peaceful protests helped bring an end to these unjust laws. Still, racism toward African Americans remains a huge problem.

For years, many Americans have said that some police officers are racist and treat black people—and other people of color—differently than they treat white people. In the days since Floyd’s death, across the world, people of all races and backgrounds have held marches and other demonstrations to call for change.

College student Kayla JuNaye Johnson, age 21, has taken part in the protests in Minneapolis. “I would always go out and support protests but never took full action like I did yesterday,” she told The New York Times. “Now I finally know how us African Americans felt during the civil rights movement.”

Demonstrators in Atlanta, Georgia, are overcome with emotion.

Most of the protests have been peaceful. In some cities, police officers have shown their support for the protesters’ message. In Petersburg, Virginia, for example, Chief Kenneth Miller and a handful of officers joined the protesters.

Violence has also erupted in some places. Some people have started fires, while others have broken into stores and looted, or stolen, goods.

Such actions have been widely condemned by both bystanders and protesters. That includes Floyd’s brother, Terrence Floyd, who has urged the protesters to remain peaceful. He says violence and destruction are “not going to bring my brother back at all.”

The four officers involved in Floyd’s arrest were quickly fired. Derek Chauvin, the officer who pressed his knee into Floyd’s neck, has been charged with murder. The three other officers were arrested on June 3, nine days after Floyd’s death. They were each charged with a serious crime.

Still, the demonstrations have kept going, as protesters continue to demand an end to racial bias and the killing of Black people by police officers.

For his part, U.S. President Donald Trump has issued mixed messages about the protests. A few days after Floyd’s killing, the president said, “I understand the hurt. I understand the pain.” But he later tweeted, “When the looting starts, the shooting starts.” Many people interpreted that as a threat to use deadly force against some protesters.

Meanwhile, some public health experts are focused on other concerns. The recent protests have brought hundreds of thousands of people out of their homes and onto the streets. Health experts say this could lead to a new surge in cases of Covid-19. The disease can spread more easily when people are packed close together. Officials have been urging protesters to get tested.

Still, despite the risk of contracting the disease, hundreds of thousands of people continue to gather in protest and to call for an end to racism. Candice Elder of Oakland, California, is one of them.

“I am heartbroken and outraged every day,” she told The New York Times. “I’m tired of being sick and tired.”

In Woodstock, Georgia, people of all ages gathered to protest the police killing of George Floyd and racial injustice. A Scholastic Kid Reporter was there to cover it.